Home   Blog   Do You Need To Pay London's ULEZ Charge For Your Van?

Do You Need To Pay London's ULEZ Charge For Your Van?

ULEZ stands for Ultra Low Emission Zone and refers to an area enforcing strict emission standards on all vehicles being driven within it. The UK's first ULEZ came into force in central London on the 8th April 2019, replacing the T-Charge.

At inception, it will cover the same area as the Congestion Zone, although it has already been agreed to extend London's ULEZ from the 25th October 2021 to cover the inner London area bounded by the North and South Circular roads. To check which roads fall within the charging zone, you can use the online postcode checker. 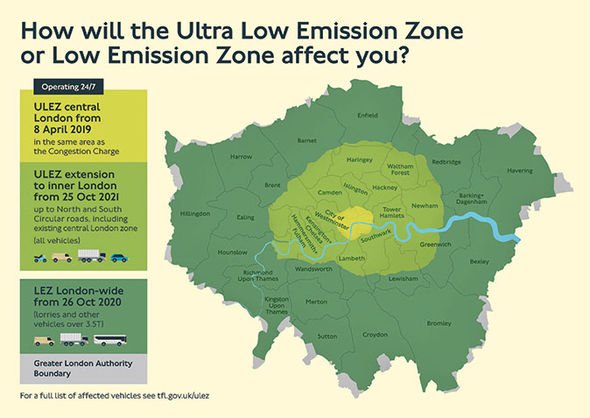 The aim is to reduce the number of high-polluting vehicles on the road and reduce the number of motorists in central London. In turn, this will reduce the dangerous nitrogen oxide (NOx) and particulate matter (PM) levels in the air. Research has found that air pollution is linked to thousands of deaths every year.

If this initiative is successful, it is conceivable that it could be rolled out to other high polluting areas across the country.

HOW MUCH DOES THE ULEZ COST?

For vehicles that don't meet the emissions standards, there will be a daily charge of:

Unlike the Congestion Charge which only runs between Monday and Friday, 7am - 6pm, the ULEZ charge runs midnight to midnight, 7 days a week, 365 days a year including all public holidays. As a result, if you drive into the zone at 11pm and leave at 2am the next day, you'll be expected to pay £25 (or £200 if you're driving a non-compliant vehicle over 3.5 tonnes).

The ULEZ charge is in addition to the Congestion Charge of £11.50 per day, so you could be subject to a daily fee of £24 just to travel into central London. Over the course of a year, the maximum that you could face paying is an extra £7,552 to run your van.

Areas covered by the ULEZ will be clearly signposted with road signs at every entry point along the boundary and along key arterial approaches. There won't be any barriers or toll booths to pass through, instead, cameras will read vehicle registration plates and check them against the government's database to see if the vehicle meets the ultra low emission standards.

WHAT ARE THE ULEZ EMISSION STANDARDS?

The ULEZ will be enforced based on the declared emissions of the vehicle rather than the age. These emissions standards are based on the Euro standards that set top limits for polluting nitrogen oxides and particulate matter from vehicle engines.

The most recent Euro 6 framework was released in January 2014 for larger vehicles and introduced for all light vans from September 2015. This means that every van registered after September 2016 should meet the Euro 6 standard, although some have been available since 2013.

According to ULEZ standards, vehicles must meet the following Euro frameworks to be exempt from the charge:

If you don't know your van's Euro emission standard, you can check your vehicle registration document (V5C). If you can't find it, or it isn't listed, you can use the online ULEZ vehicle checker - all you need is your vehicle's number plate (VRM).

Just because your vehicle meets the current Low Emission Zone (LEZ) standards, doesn't necessarily mean that it will meet the tougher ULEZ standards.

HOW CAN I AVOID THE ULEZ CHARGE?

Data from the Department for Transport found that almost two million vehicles that used the Congestion Zone in 2018 failed to meet the required emission standards enforced by the Ultra Low Emission Zone.

All van manufacturers are required to only sell vehicles that meet the latest emission standards, so if you buy directly from a main dealer, you're guaranteed to have a van that's exempt from the ULEZ charge.

Similarly, a used van registered after September 2016 - so it will have a '66', '17', '67', '18' or '68' plate - is subject to the Euro 6 regulations. In addition, many more second-hand Euro 6 vans are becoming available as rental companies and large businesses look to renew their two- to three-year-old fleets.

Alternatively, if you want to keep your current van, you can fit emissions reduction technology as long as it has been certified by the government's Clean Vehicle Retrofit Accreditation Scheme (CRVAS).

Finally, you could invest in an electric van such as the Nissan e-NV200 or Renault Kangoo Z.E. which doesn't have a traditional combustion engine so they don't emit NOx or CO2.

HOW TO PAY THE ULEZ CHARGE

If you don't want to upgrade your van or fit additional technology, you will need to pay the £12.50 charge using one of these methods: