Home   Blog   How To Get Cheap Van Insurance For Young Drivers

How To Get Cheap Van Insurance For Young Drivers

In the eyes of a van insurance company, a young driver is someone between the ages of 17 and 24. Statistically, this age group will be forced to pay the most expensive insurance premiums. Some van insurance providers will only offer policies to drivers over the age of 21 and some are even stricter - not willing to insure anyone under 25. 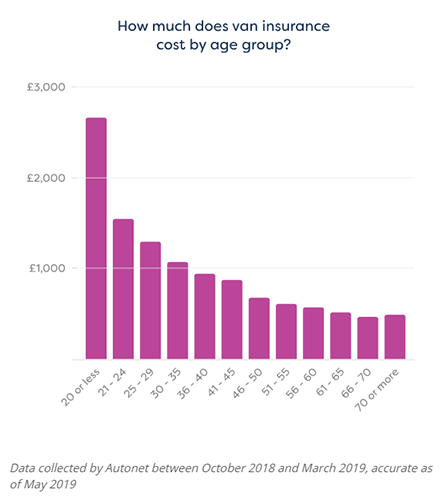 Why Is Van Insurance So Expensive For Young Drivers?

Young drivers are seen as a higher risk to insure because they have less experience on the road and are more likely to make a high value claim. According to statistics collected by the AA, a third of 18-24 year olds have been involved in a crash when driving. In addition, 23% of the same age group had been involved in an accident whilst driving within six months of passing their test.

Without a few years' of driving history or no claims discounts to fall back on, insurers have to use statistics like these to judge all young drivers until they can prove that they present a lower risk.

How Can Young Drivers Get Cheaper Van Insurance?

Although young drivers are still likely to have to pay a high insurance premium, there are some things you can do to make your van insurance less expensive.

Telematics insurance, also known as black box insurance, is a type of policy that was specifically developed to help young drivers get cheaper insurance premiums if they can prove that they're a safe and careful driver.

A telematics device - which is often a black box (hence the name) - is fitted to the on-board diagnostics (OBD) port of your van. Alternatively, some insurers will ask you to install a smartphone app that uses your phone's GPS. The box or app will start to monitor:

All of this information will automatically be fed back to the insurer. They can then potentially offer discounts based on how, when and where you've been driving your van.

As well as being able to save you money on your van insurance, the telematics device also acts as a GPS tracker which could help you track the van down if it ever gets stolen.

In the event you're involved in a low-speed collision, the black box will record the speed you were travelling at the time of impact which could help you argue against any false whiplash claims.

ADD A LOW-RISK DRIVER AS A NAMED DRIVER

For young drivers with little or no driving history, adding a more experienced driver with a good driving history and several years' of 'no claims' as a named driver can help reduce the cost of van insurance.

This could be anyone, including a parent, older sibling or other relative. It's always best to add them as a named driver on your policy rather than being added on their's so that you can build up your own no claims bonus.

Until recently, vans were classed into groups between 1 and 20. However, in 2016, 30 new groups were added to reflect how vans and van specifications had changed since the groups were last reviewed. Vans in Group 1 are considered to be the cheapest to insure, while vans in Group 50 will be the most expensive to insure.

As you might expect, the smaller the van the cheaper it is to insure. If you're just starting a business as a young driver, it's advisable to try and go for a small van like the Citroen Berlingo or Peugeot Partner; however, the size of van you choose is often dictated by the tools and other items you need to carry.

Whether you're a young driver or someone that's been driving for over 20 years, your van insurance premium can always be reduced if the van is made more secure.

Vans are more frequently targeted by thieves because they're more likely to be storing expensive items inside, so they present a higher risk to insurance providers than cars.

By fitting security devices such as alarms, an immobiliser, additional locks or a tracking device, your insurance provider should bring down the price of your policy.

Increasing the voluntary excess you're willing to pay will reduce the amount the insurance company has to pay if you make a claim which often results in them lowering the overall price.

IMPORTANT: You need to be able to pay the higher excess amount in the event of a claim.

Saving up to pay for your van insurance in one go rather than monthly instalments will often work out cheaper because most insurers charge interest on monthly payments.

Use a number of different comparison sites to shop around to find the cheapest van insurance quotes available. If you want to add a named driver, try using different people to see how that affects the quotes.

NOTE: Remember that the cheapest quote isn't necessarily the right policy. Make sure it includes everything you need and provides the appropriate level of cover.

The van itself can have a major impact on the price of insurance, especially for young drivers. Below is a list of some of the cheapest vans to insure by size: